Welcome to the home of award-winning author Nina Cordoba. We’re casual here, so come in, take off your shoes and grab a drink from the refrigerator. Feel free to check out the books and choose your favorite blog topic—whether it’s the crazy quirks of Nina’s daily life or thoughts for writers. And please visit the Contact Page to sign up for book notifications or say “Hi.” Thanks for stopping in!

Martin and Owen Funny Romantic Mysteries are getting a new look!
As much as I loved the old covers, my assistant and I realized when she was running test ads a few months ago that there was too much of a disconnect between the ad copy we wanted to use and the covers of the books. There were also issues with people thinking they were cozies. So, the wonderful artist Kostis Pavlou has drawn some that better illustrate the suspense, action, and the fact that the books star a male-female duo.
So, here they are! 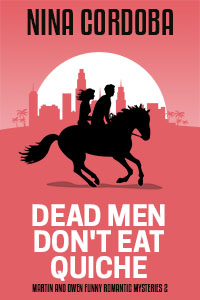 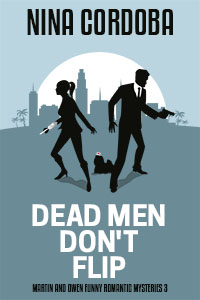 Conjoined at the hip?

Rika is excited to snag her first private investigation client, even if it’s just a suspected cheater case. But when she and Nick get inside the supposedly empty house, they find two men in bed together, literally joined at the hip, one dead with a screwdriver sticking out of his eye. Grigore Vatamanu has been murdered the night before planned separation surgery, and his conjoined twin Teodor must be rushed to the hospital before he dies, too!

Nick and Rika learn the twins are the eldest brothers of the Vatamanu family, Cirque de Sorbet’s most popular act, and the cheater investigation turns into a murder case. But with a circus full of angry performers, a desperate documentary crew, and the surviving twin’s sketchy fiancée, the case is chock-full of possible murderers with little evidence against any of them.
As they investigate, Nick is eager to get this relationship nailed down—preferably by nailing Rika. He seizes an unexpected opportunity, but can he get past whatever’s been holding her back and make it stick? And can he keep Rika and LeeAnne from getting themselves killed before Rika is his?

(Note: This series is best enjoyed when read in order.)

Dead Men Don't Chew Gum (Martin and Owen Funny Romantic Mysteries #1) got a cover refresh in celebration of the impending release of book #3.

This was fun!
Kimberly Kaye with radio station Wfkx interviewed me as her
Author of the Week recently and she sent me the recording.
The 8 minutes flew by! Haha!Click if you want to listen.

What doesn't kill her makes her hungrier.
Join Rika and Nick--on her turf this time--as they dodge Microtologists, look for her missing father, and try to solve a murder before the killer takes them out, too.
Dead Men Don't Eat Quiche is out in eBook form. Coming soon in print.

Not Dreaming of You

Always Dreaming of You

No More Mr. Nice Girl is now out in audio acted/narrated hilariously by Susanna Jones! If you're not an Audible member, but are Audible-curious, check out my FREE offer in my 10 Reasons Women Should Listen to Audiobooks blog.

If you are already an audiobook listener, here are the buy links.

Dead Men Don't Chew Gum has been released on Amazon in paperback and ebook! For description, excerpt and links to most English-speaking countries, click here.

To read more about the series and other stuff Nina's got up her sleeve, go to the Never Take the Short Cut blog post.

Now available for pre-order on Amazon!

I've got the cover to my next book: Dead Men Don't Chew Gum! It's the first book in my new (Martin and Owen) funny mystery-romance series.

All Nina Cordoba novels are now available in paperback and ebook!

Brits and Canadians and Aussie's, oh my!

Well, now I see that the Australians have gotten in on the Kindle act and are buying my books, so I made poor, overworked Mr. Nina create buy buttons for them too, in addition to the US, UK, and Canada buttons he already added. I think we're about to run out of English-speaking countries, so maybe he can rest for a while.

Mr. Nina has added buy buttons to the various book pages on this site especially for you. Thanks for reading!

No More Mr. Nice Girl has been edited and will be published in a matter of days! To be notified when it's released, go here and fill in your email address.

Always Dreaming of You is coming this fall 2013! Sign up now for book release notification.

I am thrilled and relieved to say that my women's fiction love story Mia Like Crazy is finally available!

Author Christie Craig asked me to guest blog, so I decided to share some of my secret "weight loss tips" with the masses. Haha!

I had to take a screen shot today, when I found both my romantic comedies in the 1,000's ranking-wise on Amazon. I've had an awesome couple of months. People keep buying my books and I've gotten so many nice emails from readers (and, so far, no nasty ones--fingers crossed). Honestly, I never expected this kind of response. I thought I'd have a much smaller niche audience that I'd have to grow reader-by-reader over years. Thanks so much to all of you!

Mini-excerpt from Don't Make Me Make You Brownies (Avail. Aug. 8):

When Abbie came out of the house a few moments later, the two women were chatting in the driveway. She started to walk toward them until—

Bam! There was a movement across the street and her eyes were transfixed on what could only be described as…a man.

Not just any man. A man’s man, manly, man—complete with broad shoulders and muscles glistening in the sun as his hot Houston sweat trickled over them. She stopped and watched him push a quiet lawnmower onto the driveway. He reached down to pick up a pair of hedge clippers, and she was treated to the sight of his tight round butt attached to thighs of steel.

And when she thought she couldn’t get any luckier, he turned back in her direction, took off his baseball cap and pulled his shirt up to wipe the sweat from his forehead. She felt like Max had looked a few minutes before.

Everything went into slow motion. Across-the-Street Guy was nothing but rippling, smooth muscle all the way up to his chest. Abbie thought she caught sight of a nipple and imagined rubbing her tongue over it.

Out of the corner of her eye, Abbie noticed her two companions looking at her. They turned to see what she was staring at. “Hey, Rick!” They called as they waved casually to him. He smiled and waved back.

Could he be any more perfect? He had just enough of everything in the right places without too much extra to make him silly-looking like those body builders at her gym. And what happened to that “Fattest City in America” thing?

Abbie’s mind raced, which was nothing new, except that all the questions roving through it were on one subject. What was the story on this Rick guy? Where’d he get such a nice bod? The gym? Genetics? Could yard work really do that for you?

Maybe it was his job. A manly-man job to be sure. A fire-man or police-man? But since when had she found those kinds of guys hot, anyway? The cops were an extension of the oppressive government—at least that’s what her dad always said.

Don't Make Me Make You Brownies is scheduled for August release!

Not Dreaming of You is now available at Amazon Kindle and B&N for Nook!